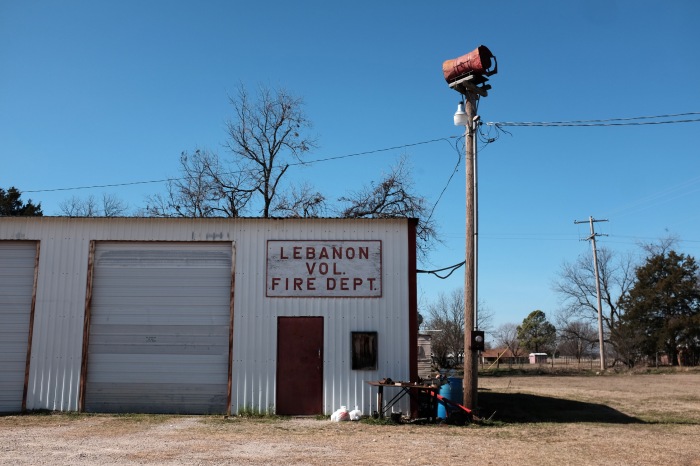 I only spent one day in Lebanon, Oklahoma. A small town of 300 or so people, on the shores of Lake Texoma, where Texas peeks from its Southern tip. My photographer friend Dickie Hill drove from Dallas to join me, and we spent some time at the fire station, talking with Fire Chief Terry Hewitt and then grabbing burgers at the gas station, the only food joint around.  After Dickie left in the afternoon, I walked around the sleepy town, but there was little to do other than avoiding the pit bulls standing guard in front of some of the dispersed houses there.

I got back to the fire station where I had parked my RV, getting ready to leave. Then I thought I could first check the tornado shelter in the field by the station. I wanted to see if it was as large as the shelters I was used to, but it was a small concrete room with only a few benches. It was peaceful. Then again, the whole town seemed peaceful.  As I walked back up into the daylight, an older man was waiting by my RV, leaning on the hood of his pickup truck. A tall, heavyset man. Bald, white mustache, big gold rings on both his ring fingers, and he wore black and yellow snake-skin boots. 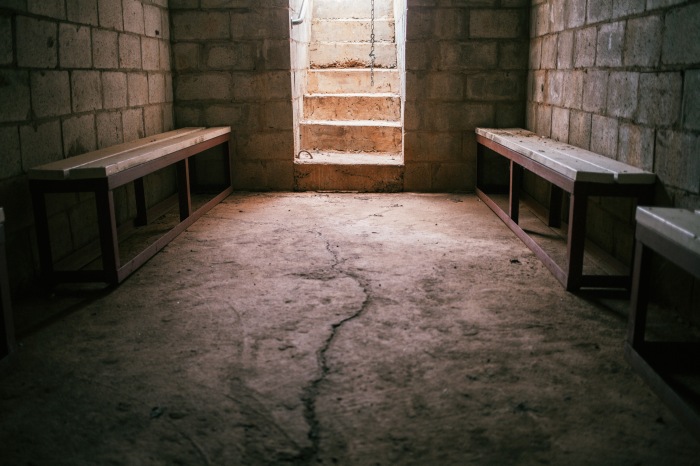 Inside the tornado shelter

“I’m from Lebanon.” The phrase didn’t seem to register with him. I added: “The country, that is.”

“Well, obviously. So what brings you here?”

I tell him my story and about the trip I was taking, and he says: “Come on, hop into my truck. Let’s take a ride and I’ll show you the town. I’m the pastor for the Baptist church here, by the way.”

I hesitated at first, wondering if it was safe to get into the car of a strange man in an empty town in the middle of nowhere. Then I figured, what the hell, just take the chance. I climbed into his truck and sat down. As I was buckling my seatbelt, Pastor Bob pulls a small, soft leather case from a dashboard compartment and says: “this is my sword.”

I grabbed the door handle; It wasn’t exactly a sentence that inspires confidence. “That’s a small sword”, I say naively. The leather case was smaller than a notebook. My mind went as far as thinking this could be a sword that required assembly from multiple pieces; like an IKEA version of weaponry. If he wanted to stab me, at least I had enough time to defend myself before he put it all together.

“Yes, it’s a small but powerful sword. It’s my bible”, he said… It’s safe to say it was one of the happier times a bible was pointed at me. I relaxed a little.

“Are you Muslim, son?”, he asked. “No, much worse, sir. I’m Catholic”, I said; a cheeky joke on some Evangelicals’ disdain for the papists, especially Southern Baptists. He laughed and said: “Well you came from Lebanon a bead-puller and you’ll be leaving Lebanon, Oklahoma a Baptist.” It was my turn to laugh, a bead-puller being a pejorative of Catholics for pulling the beads on the rosary while praying.

We slowly drove around, with him pointing at each house we passed by and telling me the family’s story. He knew all the residents by name. He was a Texan, but he came to town twice a week for church services. I asked him if everybody in town was a Baptist and he answered: “We have some Baptists and a whole lot of Nothings.” I was curious as to what a Nothing was.

“Do you see these houses on that side of the road? Do you see the pit bulls? Drug dealers live in these houses. Regular dogs are for regular people. But pit bulls here are for those who don’t want you to come close. This whole place was a drug town two years ago. That’s what a Nothing is. When I came here I started working on bringing them to my church. I converted the son of the biggest dealer and his father is fighting me. But look, this isn’t about church. If going to church makes you a Christian, then going into a garage makes you a car. I want all these people to quit dealing drugs and join me.”

We then drove to the lake, and he stopped the car there and asked me: “There isn’t much time, but how about I baptize you in this Lake?” I didn’t want to offend him but I couldn’t help myself from laughing. “It’s alright, sir. I’m good. Plus I’m not a Nothing”, I answered.

We kept driving around, with Pastor Bob introducing me to his wife over the phone at first, and then to his deacon Truman over coffee, a 79-year-old man who looks to be 60, who can’t read or write because he started driving a tractor when he was 8, then worked on oil rigs all his life, and who had fallen off a ladder sawing a branch the week before, broke 4 ribs, got bit by a rattlesnake, and was still able to stand up and shake my hand so hard he almost broke it.

As we were leaving Truman’s house, I asked Bob why he took me there. “I wanted you to meet good people. Any time we meet decent folks, it makes us less cynical about the rest.”

It was time for me to leave town, but Bob insisted on saying a prayer first. “Just give me your hands and learn how a real prayer is said.” I obliged. He closed his eyes and said: “Dear Lord, I put this young man in your care; make his travels safe.” He then gave me his card and wrote his address on the back. “When you return home, remember to write to me and tell me how it all went.” 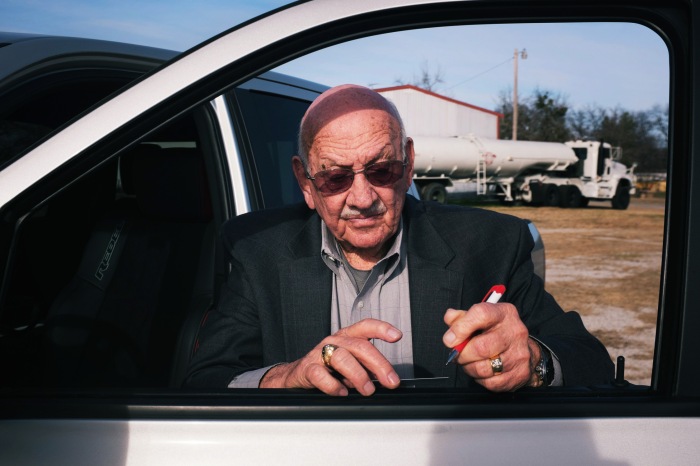 Pastor Bob Garsee. Left-handed as I am. 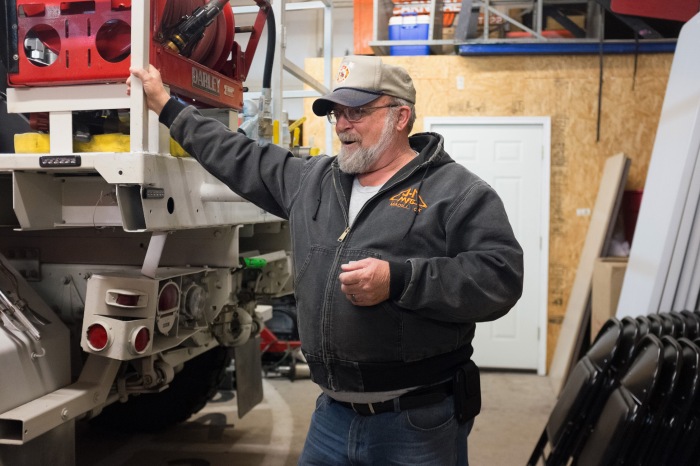 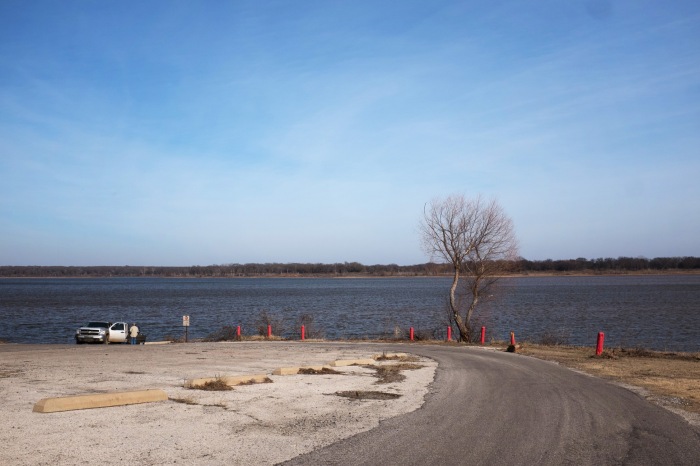 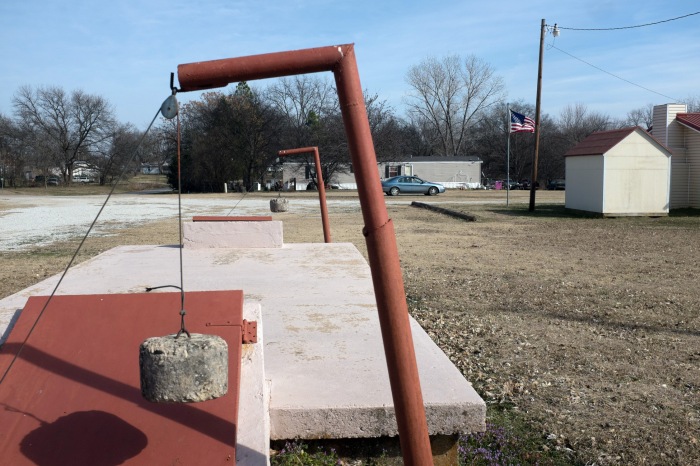 4 thoughts on “Lebanon, Oklahoma: The Baptists and the Nothings.” 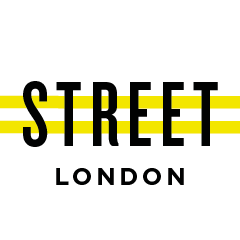